Lake Cuyamaca is a small shallow reservoir located about an hour east of downtown San Diego in the Cuyamaca Mountains. The 110 acre lake is San Diego’s most scenic reservoir, and offers unique fishing opportunities not available at any of the other local reservoirs.

Lake Cuyamaca sits at an elevation of 4,620 feet, so the entire climate is different. It gets considerably colder in the winter and stays cooler throughout the year – making it San Diego County’s only year-round trout fishery. The Lake Cuyamaca Park and Recreation District, which operates the lake takes full advantage of that, stocking some 45,000 pounds of rainbow trout annually.

Aside from the trout, Lake Cuyamaca offers a really underrated bass fishery as well. The lake is home to a ton of bass in the 7-11 pound range, and they see very little fishing pressure throughout the year. Because of the cooler temperatures, Lake Cuyamaca doesn’t offer the ideal growing conditions for largemouth bass, so they don’t reach the truly giant size that the other lakes see.

Sturgeon have seemed to thrive a little more, and several sturgeon exceeding 20 pounds are caught annually. Most are hooked by trout anglers, and thus most sturgeon encounters result in only stories of lost fish. Of course some anglers beat the odds, like 14 year old Kameron Kane who broke the sturgeon lake record in November of 2014. Kane caught and released a white sturgeon weighing more than 50 pounds (the scale at the lake has a max of 50 pounds) and was 62″ in length.

The dam which formed Lake Cuyamaca was completed in 1888, making it the 2nd oldest dam in the state of California. It was created to store water to be piped down to San Diego to support the growing city. At that time, water was transported down to the city through a system of wooden flumes, above ground channels.

Fish were first stocked in 1891, but drought conditions and a desperate need of water in San Diego completely wiped out the fishery in the 1940s around the tail end of World War II. The lake was desolate until the 1960s when the Lake Cuyamaca Recreation and Park District was formed to create a more permanent infrastructure at the lake. They constructed a dike to create two sections; a deeper and more viable western side and a shallow and sprawling eastern end which only holds water during very wet seasons.

There is a popular restaurant overlooking the lake on its western shore, a popular and much appreciated option for anglers at this remote reservoir. The lake also offers a small but suitable tackle store for bait and tackle, and a mini-mart style store for snacks and beverages.

A paved launch ramp is available for private boaters, and a boat dock holds a large rental boat fleet for other anglers to get out on the lake.

Shoreline access is tremendous at Cuyamaca, the lake has gentle sloping banks with limited obstructions and several access points. Several well designed jetties, fishing floats, and fishing docks are stationed around the lake to provide additional access. There is even a handicap fishing dock on the lake’s dike at the northeast corner of the lake.

Lake Cuyamaca is open daily from 6:00 AM to sunset year-round.

Trout that live in different environments can have dramatically different colorations and patterns. Mostly, these colors and patterns form as camouflage, based on the surroundings, and will change as the fish moves to different habitats. Trout in, or newly returned from the sea, can look very silvery, while the same "geneic" fish living in a small stream or in an alpine lake could have pronounced markings and more vivid coloration; it is also possible that in some species this signifies that they are ready to mate. It is virtually impossible to define a particular colo pattern as belonging to a specific breed; however, in general, wild fish are claimed to have more vivid colors and patterns.

Trout have fins entirely without spines, and all of them have a small adipose fin along the back, near the tail. The pelvic fins sit well back on the body, on each side of the anus. The swim bladder is connected to the esophagus, allowing for gulping or rapid expulsion of air, a condition known as physostome. Unlike many other physostome fish, the trout do not use their bladder as an auxiliary device for oxygen uptake, relying solely on their gills.

The smallmouth bass is generally brown (seldom yellow) with red eyes,and dark brown vertical bands, rather than a horizontal band along the side. There are 13–15 soft rays in the dorsal fin. The upper jaw of smallmouth bass extends to the middle of the eye.

Males are generally smaller than females. The males tend to range around two pounds while females. can range from three to six pounds. Their average sizes can differ, depending on where they are found.

Their habitat plays a significant role in their color, weight, and shape. River water smallmouth that live among dark water tend to be rather torpedo shaped and very dark brown in order to be more efficient for feeding. Lakeside smallmouth bass however, that live for example in sandy areas, tend to be a light yellow brown to adapt to the environment in a defensive state and are more oval shaped. 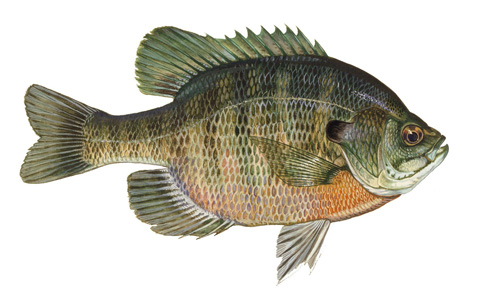 They are characterized by their deep, flattened, laterally compressed bodies. They have a terminal mouth, ctenoid scales, and a lateral line that is arched upward anteriorly. The bluegill typically ranges in size from four to 12 inches, and reaches a maximum size just over 16 inches. The largest bluegill ever caught was four pounds, 12 ounces in 1950.

Most catfish are bottom feeders. In general, they are negatively buoyant, which means that they will usually sink rather than float due to a reduced gas bladder and a heavy, bony head.

Catfish have a variety of body shapes, though most have a cylindrical body with a flattened ventrum to allow for benthic feeding. 100 million in water. In addition, channel catfish have taste buds distributed over the surface of their entire body. These buds are especially concentrated on the channel catfish's four pair of barbels (whiskers) surrounding the mouth — about 25 buds per square millimeter. This combination of exceptional senses of taste and smell allows the channel catfish to find food in dark, stained, or muddy water with relative ease. 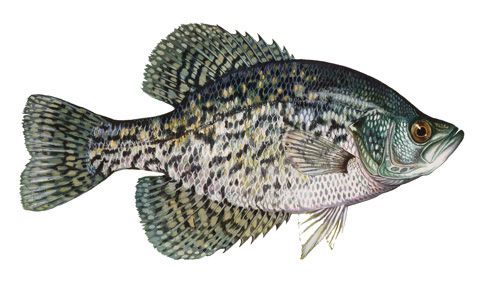 There are two different species of crappie, black and white, but they are difficult for even the most experienced crappie angler to tell apart. These species are very similar, and they can be found throughout the United States, but there are some key differences in their biology, making each species unique in some important ways for you as a crappie angler.

Sturgeon are primarily cartilaginous, lack vertebral centra, and are partially covered with bony plates called scutes rather than scales. They also have four barbels—tactile organs that precede their toothless mouth and are dragged along often murky river bottoms. Sturgeon are distinctly and immediately recognizable for their elongated bodies, flattened rostra, distinctive scutes and barbels, and elongated upper tail lobes.

They are primarily benthic feeders. With their projecting wedge-shaped snout they stir up the soft bottom, and use the barbels to detect shells, crustaceans and small fish, on which they feed. Having no teeth, they are unable to seize prey, though larger specimens can swallow very large prey items, including whole salmon.

Built with from JoomlaShine